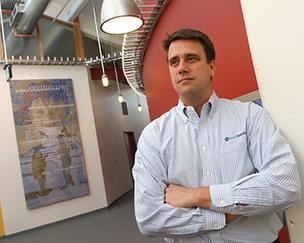 When Steve Butz founded Social Solutions in 2000 he left his job as a social worker in order to develop software that might help other social workers and their organizations measure their impact and improve their effectiveness. This decision to leave direct service work was a difficult one: Steve had been developing strong relationships with a large number of youth during his career and was reluctant to leave what he still considers to be most important work in our country.

In 2004, Steve learned about an organization, ROCA, based in Chelsea, MA whose work with disengaged youth embodied everything he had come to understand as critical in social service work- namely, the paramount importance of ensuring that “transformational relationships” were being developed by direct service staff with program participants. Steve worked with ROCA to configure a database to allow them to properly measure and manage these relationships. He was deeply inspired by Molly Baldwin and Anisha Chablani and their commitment to consistently improve their program by focusing on the most critical piece of the work – the relationship with the young person. Together, they developed a performance management framework that helped reveal the correlation between effective practice and youth outcome achievement. He wanted to share their insights and learnings with other organizations and highlight the transformational nature of truly great social work.

In 2007, after the initial success of Social Solutions, Steve founded the Superstar Foundation and brought together a Board who were steeped in this work. Superstar established the Veronica Award to recognize the very best direct service staff in the field who distinguish themselves and their work by using data to constantly adjust their service delivery approach while intentionally striving to build transformational relationships with those being served. Steve recognized how fortunate he was to be born into a family who surrounded him with loving, positive, transformational relationships. The Veronica Award is named after Steve's mother, Veronica Butz, whose faith and commitment to various social causes left an indelible mark on Steve and laid the foundation for his social conscience. She passed away in 2005. In naming this award after his mom, Steve is working to honor her memory by establishing an award that recognizes the life-changing impact that the best social workers have on the individuals and families they serve.